Civic Elections in Metro Vancouver on October 15 – The results are in!

Voting for change seemed to bring about the downfall of many incumbent mayors. Thirty-seven mayors across BC lost their bids for re-election. But voter turnout continued to be low. On average across BC there was only a 33% voter turnout. 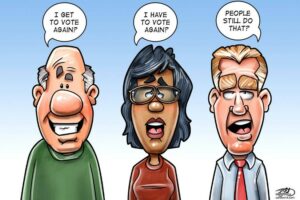 In Vancouver only 35% of eligible voters cast a ballot.

However, for those who did vote, the two main issues seemed to be housing availability and affordability as well as safety on the street. Other key issues in many Metro Vancouver municipalities were homelessness, mental health issues, drug overdose and crime. In Surrey there was also controversy over policing and the change from the RCMP to a city police force. Ten municipalities in Metro Vancouver have new mayors.

Vancouver – Ken Sim defeated incumbent Mayor Kennedy Stewart. Sim had 85,732 votes, well ahead of Stewart’s 49,593. Sim’s top priorities are to immediately requisition the hiring of 100 more police officers and 100 mental health nurses to improve public safety. He also wants to speed up permitting processes at city hall. However, there will not be much change in the direction of many projects approved by the previous mayor and council which included the Broadway plan, the citywide Vancouver plan and proposed SkyTrain extension to UBC, all of which were supported by three incumbent ABC candidates and by Sim in public statements. It is the first time a single Vancouver party (ABC) won a majority on council, school board and park board since Vision Vancouver did so in 2011. (Source: The Vancouver Sun)

In the other 20 Metro Vancouver communities, the results are:

Burnaby – Mayor Mike Hurley was acclaimed as there were no contenders

Pitt Meadows – Nicole MacDonald is the new mayor by acclamation

Port Moody – Meghan Lahti was elected as mayor; the current mayor did not seek re-election

Whatever changes take place in each of the communities in the next four years, all of the elected bodies will have to work together on big issues affecting Metro Vancouver and BC as a whole, whether that’s transit, housing affordability or the impacts of climate change.

What happened in your municipality on voting day?

Were you satisfied with the results?

Will the elected candidates fulfill their campaign promises?

What will you be watching for over the next four years?

How can we get more people out to vote?